What is a LAMP stack?

The LAMP stack is the foundation for Linux hosted websites is the Linux, Apache, MySQL and PHP (LAMP) software stack.

The Four Layers of a LAMP Stack

Linux based web servers consist of four software components. These components, arranged in layers supporting one another, make up the software stack. Websites and Web Applications run on top of this underlying stack. The common software components that make up a traditional LAMP stack are: 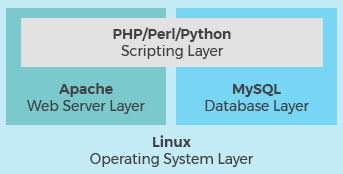 Understanding the four software layers of a LAMP stack aids the troubleshooting process. It allows us to see how each layer relies on one another. For instance; when a disk drive gets full, which is a Linux layer issue. This will also affect all other layers in the model. This is because those other layers rest on top of the affected layer. Likewise, when the MySQL database goes offline. We can expect to see PHP related problems due to their relationship. When we know which layer is exhibiting problems. We know which configuration files to examine for solutions.

The four traditional layers of a LAMP stack consist of free and open-source products. Linux, Apache, MySQL and PHP are the cornerstone of a free, non-proprietary LAMP stack. There are several variants of the four stack model as well. These variants use alternative software replacing one or more of the traditional components. Some examples of these alternatives are:

You can explore these alternative software stacks in greater depth using online resource. The LAMP stack Wiki is a great place to start:

How can we help?

The LAMP stack is an industry standard and is included in all of our Core-Managed and Fully Managed Linux based servers. Our support teams work hand in hand with the LAMP stack on a daily basis. You can rest assured we are at your disposal should you have questions or concerns. To learn more you can browse our latest product offerings.

About the Author: Jason Potter

A veteran of the IT Support field, I have more than a decade of experience in systems administration, web hosting, and cPanel servers. I enjoy writing and providing complicated technical concepts in layman terms. On my free time, I enjoy playing several types video games, automation scripting and just living life with my wife and two kids.

What is Bare Metal Programming?

Useful Features in cPanel for Your Sites

How to Clone a Drupal Site to Another Domain

What is VMware Fusion?