Have you ever wanted to use SSH to control your Linux server from Windows? You’ve most likely downloaded and launched third-party applications like PuTTY or KiTTY to get this functionality on your Windows computer. Thankfully, with the Windows 10 Fall Creators Update, you can now use a built-in SSH client directly within your Windows OS.
Third party applications are not fully managed. However, our support team will do their best to provide help when they can. For further support, we recommend contacting the applications’ developer for extensive issues, since these applications are not supported by Liquid Web.

Since the OpenSSH client in Windows 10 is still in the beta stage, the client is not installed by default in Windows 10. But not to worry! The process is simple and only requires a few clicks and a restart of your computer to begin using SSH right from the command prompt or Powershell. Let’s take a look at how to install OpenSSH on your Windows workstation.

Note:
Because the OpenSSH client was introduced in the Windows 10 Fall Creators Update, you’ll need to first update to at least that version of the operating system. You can update using Windows Updates or by following the link above. Once updated, you’ll be on Windows 10 version 1709. To see which version of Windows you are running, click on the start menu, then select Settings -> System -> About.

Because this feature is only available in Developers Mode, you’ll need to first make sure you’ve enabled that option. Don’t worry, it should only take a few minutes to download the 6 MB file necessary to enter Developers Mode. 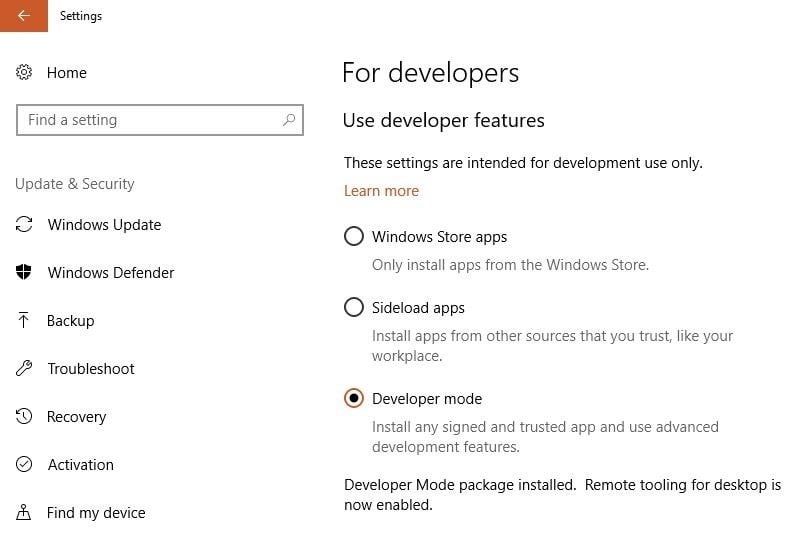 Now that we have Windows 10 in developer mode the SSH client can be installed on Windows.

All you need to do now is reboot your computer and you are ready to start using SSH from the command prompt or Powershell!

To use OpenSSH, after you’ve completed the above steps, just open Powershell or the command prompt and enter the command SSH to see the list of current arguments it accepts.

OpenSSH in Windows works just like it does in other operating systems. For example, to connect to a server example.com with username Dave, I would enter the command:

ssh dave@example.com
By default, the client attempts to make the connection on port 22. If you need to specify a different port, just use the –p flag, followed by the alternate port number:

ssh dave@example.com -p 7654 (using the port that is open on your server for ssh)

And that is it. Your Windows computer can now use SSH directly from the operating system. No more having to download or launch any third-party applications.

For further explanation of SSH and the optional commands visit SSH Communications Security, the company behind SSH (Secure Shell).

About the Author: Helpful Humans of Liquid Web

How to Install the Pip Package Manager on AlmaLinux