The Three Top Causes of a Cloud Outage

Netflix. Amazon. Twitter. What do these three major corporations all have in common? At one point or another, all three have suffered a cloud outage – one that not even their extensive cloud networks could prevent. As a matter of fact, in most cases, it was a cloud failure that caused the outage in the first place. Although the cloud is an incredibly powerful tool, it is not an infallible one.

Even if it does do so less frequently than other systems, it can still go down. Understanding how and why is the first step in preventing that from happening. But first, you need to understand something about the cloud – namely, that it is not a monolithic thing.

“There are a lot of different products that call themselves “cloud” services,” writes Cloudflare’s Matthew Prince. “What that means, however, is very different from one service to another.”

What he means is that some cloud companies own and operate their own hardware. Others use another company’s hardware to run their service. And still others run their cloud service off another cloud. Interestingly, despite these differences, all three ‘types’ of cloud have the potential to fail in very similar ways.

Cybercrime is the fastest growing cause of data center outages, and cloud outages can be considered a subset of those. Given that it is software-based, the cloud is especially vulnerable here. Maybe a piece of especially nasty malware knocked some critical systems offline, or a DDOS has overwhelmed your servers.

The same security measures should apply to a cloud platform as to any other system – apply security updates immediately, monitor your systems for suspicious activity, and be ready with a disaster response plan if something goes wrong.

A load balancer that is not doing its job. A bad software update. A poorly-optimized application. All of these can cause cloud performance to drag – often to the point that it becomes unusable altogether.

As with security, apply a careful touch here. Make sure anything you upload or modify has been thoroughly tested before doing so. And again, monitor your software to ensure you remain on top of any potential bugs.

It is easy to forget that the cloud does not exist in a vacuum. It is not some magical, digital realm that permeates the air around us. Like all services and systems, it is based in physical infrastructure – and sometimes, that infrastructure fails.

As with most IT systems, power failure remains the leading hardware-based cause of dead clouds. If you operate your own cloud, shore up your IT systems and make sure they are equipped for failover. And if you use someone else’s, make sure they do so.

Ensure Your Environment is Protected from a Cloud Outage

Cloud networks are one of the most powerful business tools available. They are not, however, infallible. When mismanaged, they can fail just as readily as any IT system. By understanding this, you will better know how to prevent that from happening. – and you will be better able to recognize a host who understands that, as well.

It’s important that you look for a host who will aid you in monitoring your environment to prevent failing hardware or software from taking you down. In addition, your host should provide assurances that their cloud environment is fully secure. Liquid Web offers several cloud solutions:

Not sure which type of hosting you require? Download our 20-Point Checklist for Vetting a Managed Hosting Provider. 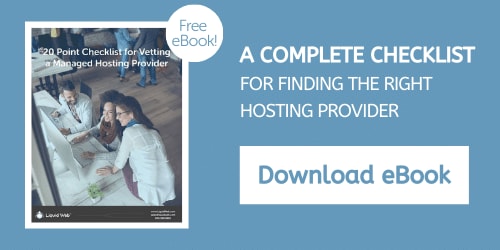