CentOS vs Ubuntu: 15 Factors to Consider!

Today we will be reviewing the major differences between CentOS and Ubuntu in a web hosting environment. Although this is not a fully comprehensive analysis of every single aspect of the numerous in-depth features of each operating system, it should provide a solid overview which will allow you to choose which system is best suited for your needs. Without further ado, let’s jump right in…

Wikipedia defines Ubuntu as follows:“Ubuntu is a free and open-source Linux distribution (that’s) based on Debian. Ubuntu is officially released in three variants: Desktop, Server, and Core: (for the internet of things devices and robots). All the editions can run on a standalone computer, or in Windows. Ubuntu is a popular operating system for cloud computing, with support for OpenStack. Ubuntu is released every six months, with(LTvarientsS) long-term support releases every two years. The latest release is (“Disco Dingo”) version 19.04 , and the most recent long-term support release is(“Bionic Beaver”) 18.04 LTS , which is supported until 2023 under public support and, until 2028 as a paid option.

Wikipedia defines CentOS as follows:
“CentOS (from Community Enterprise Operating System) is a Linux distribution that provides a free, community-supported, enterprise-class, computing platform compatible with its upstream source, (RHEL) or Red Hat Enterprise Linux. In January 2014, CentOS announced the official affiliation with Red Hat while staying independent fromRed Hat Enterprise Linux, under a new CentOS governing board. The first CentOS was released in May 2004, (and numbered as CentOS version 2), was forked from Redhat (RHEL) version 2.1AS…  (The) building of CentOS 8 commenced as of May 2019.

Currently, (as of 7/2019), Ubuntu, Debian, and CentOS are the primary operating systems being utilized today in the hosting market. Granted, many of the Ubuntu server OS’s in use may be tied to smaller private servers that are running SMB’s type sites/servers but, the sheer volume of servers utilizing Ubuntu exemplifies the growing acceptance of Ubuntu as a primary OS in the web hosting sphere. Both Google Trends and StackExchange also provides a reliable comparison in the breakdown of usage between these two systems.

If you would like to utilize a control panel to manage your web hosting services, you should closely review CentOS, as it offers the most compatibility with different management panels that you may need. Web hosting control panels like cPanel, Webmin and DIrectAdmin have always been focused on CentOS and other RedHat based operating systems. Unfortunately, Ubuntu does not support cPanel but does have quite a few alternatives, such as Webmin/Virtualmin and VestaCP.

CentOS is also constructed to be very stable and secure but as a result, many of the core systems may run older, more mature software versions with security updates that are backported from Redhat as needed. CentOS is also a solid choice for medium-large sized businesses and, websites that require cPanel. While the CentOS user base is smaller than Ubuntu, CentOS still houses an online community and also provides premium support options if you so desire. 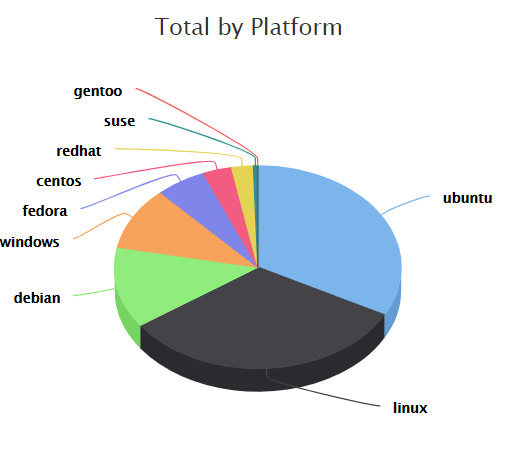 Ubuntu servers have excellent support for container virtualization as well as cloud deployment which shows its influence in the market compared to CentOS. As of June 2019, “Canonical announced full enterprise support for Kubernetes 1.15 kubeadm deployments, its Charmed Kubernetes, and MicroK8s; the popular single-node deployment of Kubernetes.“1  Not to be outdone,  CentOS offers three private cloud hosting choices as well as a public cloud platform through AWS. CentOS provides a mature platform in this area and offers excellent documentation. The chart below identifies the overall usage of cloud-based preferences as of June 2019 via EC2 Statistics compiled from Amazon.

Steam provides comparisons on their gaming platforms noting the number of users that run Ubuntu on their systems. Currently, over 30% percent of all  Steam users are running on Ubuntu, followed by 49% of other different Linux distros. Granted, gaming on Linux is not entirely related to the hosting industry but, it does show how widely Ubuntu is accepted and used across multiple sectors.

To revisit this area once more, we want to emphasize that if you are just beginning in your hosting experience, we would suggest going with Ubuntu simply because of its larger community supported user base, the extensive accumulation of tutorials and documentation available and, more frequent updates which can help you in maintaining the latest software. Ubuntu has other positives in this space as well but, there may be some scenarios where you may need to roll back to an older software version because updates may cause problems with existing sites. Additionally, if you have utilized an Ubuntu desktop in the past, you should not find it to be a very steep learning curve when starting with an Ubuntu based VPS server.

Because Ubuntu updates more often than CentOS, it does not necessarily mean that CentOS is less stable or secure. Those ongoing modifications can come at a cost though especially if a newer software version of a core Ubuntu system is updated, it may cripple existing websites that may depend on the older software version which in turn may impact functionality and/or stability. Also, with regard to security, Ubuntu does force the use of sudo initially as the main user and, disables the root user by default. This limits the possibility of running commands that may be harmful to the system.

CentOS is a solid, viable choice as well but, it might present a more difficult learning curve when starting out if you are new to Linux hosting. If you run a business, a Dedicated CentOS Server may be the better choice between the two operating systems because, it’s (arguably) more secure and stable than Ubuntu, due to the reserved nature and the lower frequency of its updates. Additionally, CentOS also provides support for cPanel which Ubuntu lacks.

Centos is designed to be stable and secure, but as a result, many services running on the server tend to be older versions with backported security fixes applied. Also, once CentOS freezes a version number, they will not provide further improvements except for security updates and major bug fixes. This is a definite positive for stability and security but, this can be bad for services like PHP or MySQL, or other standard software the server uses that are rapidly developed and may evolve over the 5-year distribution period. One solution to this concern may be to simply add additional software mirrors to solve this type of issue if needed.

After reviewing these options, it truly does come down to the purpose of the server, how it is going to be utilized for each OS, as well as the size of your business and, your technical knowledge. For small firms as well as those new to hosting, Ubuntu seems to be the safest choice and given its huge user community base, the significant number of resources that are available online, in addition to the tutorials and, their online forums, including a substantial community of open-source developers. This allows for locating solutions to problems that much quicker. In conclusion, each OS distribution has its positives and negatives so whichever version you select, ensure it meets all of your business requirements, needs, and demands.

Do you have further thoughts or questions about what system would work best for you? If so, don’t hesitate to reach out to one of our Solutions team members today to learn how you can take advantage of these technologies to increase sales and customer interactions for your business. We have the info you need to make an informed decision regarding the advantages of our hosting services and solutions. If you are having any problems with an existing site or server, please contact our Support team at 800.580.4985, open a chat, or email us at support@liquidweb.com today and allow us help!

Delete a MySQL or MariaDB Database via Command Line

Delete a MySQL or MariaDB Database via Command Line

What is Cloud Automation?

How to Create Custom Error Pages in cPanel