What Happens When There’s a Catastrophic Failure in Your Infrastructure

Posted on May 30, 2019 by Jake Fellows
Home > Blog > Enterprise Hosting > What Happens When There’s a Catastrophic Failure in Your Infrastructure

The Horrific Reality of Catastrophic Failure

The Exorcist doesn’t hold a candle to the idea of a catastrophic failure wiping out your data, your web presence… your entire operation (cue the vomit). It should scare you.

Our livelihoods—our lives—are increasingly digital. Your IT infrastructure is integral to your operations. Whether it’s your website, your database, or your inter-office communications and operations, downtime is intolerable. A catastrophe-level shutdown is unfathomable.

Fortunately, there are plenty of ways to safeguard your business from the worst. You can read about how to prevent a disaster with data backup redundancies, a high availability (HA) infrastructure, and uptime and performance. However, things happen and even the best-laid plans are well intended, but sometimes a tornado comes through a takes out your data center.

In the event that something catastrophic does occur, you need to be ready and the best way to be ready is to understand exactly what happens if (and with the right protection that’s a pretty big if) the walls you’ve built around your business come tumbling down. You need to expect the unexpected, so you’re prepared for anything that comes your way.

Subscribe to the Liquid Web weekly newsletter to get the latest on high availability technology sent straight to your inbox. 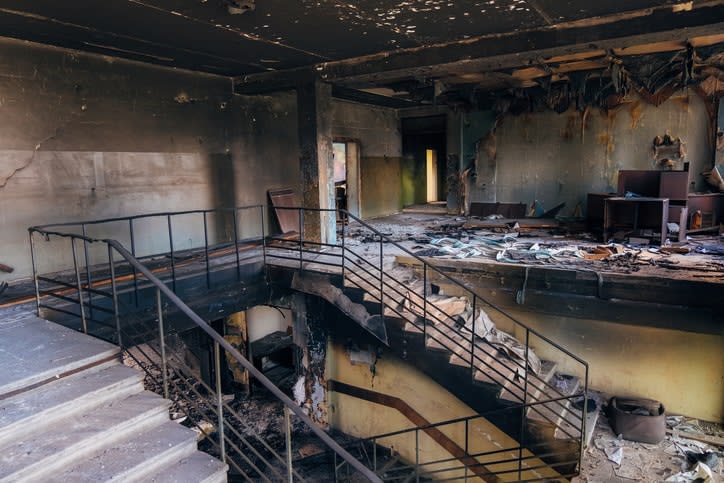 There isn’t an infrastructure out there (no matter how well designed, implemented, or maintained) that is impervious to failure. They happen. That’s why HA systems are a thing; it’s why you have redundancies, backups, and other preventative measures. But, where do they occur? When do they occur?

Well, there are 5 particularly vulnerable points in your infrastructure—housing, hardware, ISP, software, and data.

Your first vulnerable point, housing, is your physical accommodations and include the building that houses your servers/computers, your climate controls, and your electrical supply. Your housing is only vulnerable in highly specific instances (natural disasters, brownouts, blackouts, etc.) and is pretty easily mitigated.

For example, two separate sources of power, uninterruptible power supplies, battery backups, restricted access to server rooms, routine building maintenance, etc. can reliably safeguard this vulnerability in your infrastructure. This goes for your ISP (fiber, cable, wireless) and other vendors, as well. Thoroughly vetted, high-quality vendors will have their own HA systems in place, making this vulnerability in your infrastructure a low probability for catastrophic failure.

However, your hardware, software, and data are significantly more vulnerable even though there are steps your company can take to prevent failures. Servers, computers, peripherals, and network equipment age, break down, and fail; it’s just the reality of physical systems. But, non-physical systems (productivity and communication software, websites, applications, etc.) are also open to certain failures, including external attacks—DDoS, hacking, bugs, viruses, and human error.

Finally, your data can get corrupted by itself or can fail as a result of another failure in the chain; a hardware failure, for example, could wipe out your data. While some failures can be predicted and prevented—regular maintenance and replacement of equipment to prevent breakdowns, for example—others simply can’t be anticipated. A sudden equipment failure, power outages, natural disasters, a DDoS attack; these can all occur seemingly out of nowhere. You simply have to have a plan in place to react to these events in case they do (almost inevitably) happen.

A good rule of thumb is to create an infrastructure that doesn’t have (or at least attempts to eliminate) a single point of failure. All of these vulnerability points—housing, hardware, ISP, software, and data—are susceptible to single points of failure.

What is the Worst Case Scenario?

In 2007, according to the Los Angeles Times, “a malfunctioning network interface card on a single desktop computer in the Tom Bradley International Terminal at LAX” brought international air travel to an absolute standstill; for nine hours. For nine hours, 17,000 passengers were stranded on board—because this was software used by U.S. Customs, software used to authorize entry and exit, no one was allowed to disembark. This not only stopped international travel in its tracks, U.S. Customs and the airlines themselves had to supply food, water, and diapers to passengers, and had to keep refueling to keep the environmental controls on the aircraft operating. Oh, and shortly after the system was restored, again according to the Los Angeles Times, it gave out again: “The second outage was caused by a power supply failure.” Now that’s a worst case scenario. You’re not U.S. Customs or LAX, but you can relate.

Almost nine hours of downtime in a single day exceeds what 81% of businesses said they could tolerate in a single year (thanks Information Technology and Intelligence Corp).

Everyone’s worst case scenario is different, but a massive failure that cripples your infrastructure for even a few hours in a single day can have irrevocably adverse effects on your revenue, your workflow, and your relationship with your clients/customers. Any significant downtime should be a cause for concern.

Is it a worst case scenario? Maybe not, but a few days in a row—or even over the course of a year—could be.

While a systems failure is a spectrum of what can go wrong, there are two scenarios on either end—an automatic failover and a catastrophic failure in which a failover doesn’t take place either manually or automatically. Failover systems themselves can fail, but it’s more likely that there isn’t a system in place to automate a switch to a redundant system.

What follows is a look into what actually happens during an automatic failover and what would happen if such a system wasn’t in place.

What Happens During an Automatic Failover

Several scenarios can trigger a failover—your secondary node(s) does/do not receive a heartbeat signal; a primary node experiences a hardware failure; a network interface fails; your HA monitor detects a significant dip in performance, or a failover command is manually sent. In the event that a secondary node does not receive a heartbeat signal (synchronous, two-way monitor of server operation and performance), there are several causes including network failure, a hardware failure, or a software crash/reboot.

As you can see, an automatic failover is triggered (predominantly) by an equipment failure. Any time a piece of equip stops operating—or even begins to perform below its expected values—a failover will be triggered.

A failover, on the other hand, is a role reversal of the primary node and a secondary node in the event of a systems failure (network, hardware, software, power, etc.). A failover may result in data loss depending on the safeguards in place.

So, what does happen in an automatic failover? Let’s break it down:

What Happens With No Automatic Failover

Ok, so you don’t have an automatic failover safeguard in place and something breaks—or, even worse, a lot of things break. What happens? Well, that’s going to depend on what systems you have in place. If you have working backups, but no automatic failover systems in place, you’ll retain your data. However, depending on your infrastructure, the amount of time it will take to recognize a failure and the amount of time it takes to manually switch over will be much longer than an automatic solution. However, if your system is sketchy and there are vulnerabilities throughout, things get significantly more complicated and need to be addressed on a case-by-case basis. We can, though, examine what happens in systems with one or more single points of failure at critical junctures.

You’re sure to remember housing, hardware, ISP, software, and data. 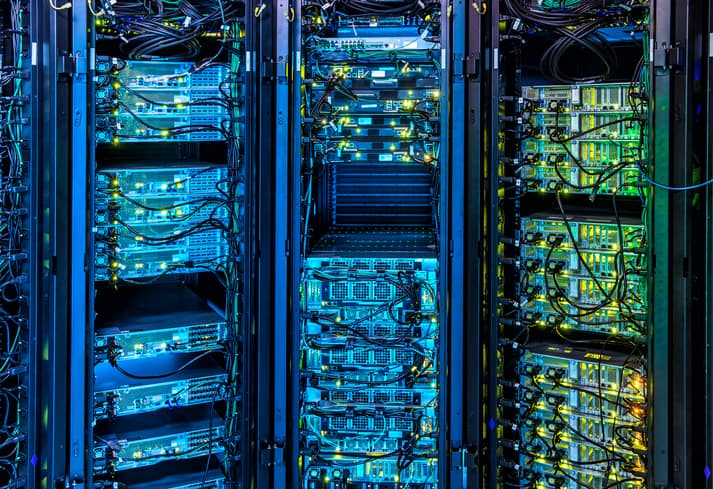 How the Right Protection Saves You

As has been mentioned, it’s up to you and your company to examine and identify single points of failure—and other weak spots—in your infrastructure.

A firm grasp of where vulnerabilities most often occur (housing, hardware, ISP, software, and data) will give you a better understanding of you own system’s limitations, flaws, and gaps.

While you can’t prepare for (or predict) everything, you can eliminate single points of failure and shore up your IT environment. An HA system with plenty of redundancies, no single points of failure, and automatic failover, you’ll not only safeguard your revenue stream, you’ll maintain productivity, inter-office operations, keep staff on other tasks, and get better sleep at night (you know, from less anxiety about everything coming to a grinding halt).

What We Offer at Liquid Web

At Liquid Web, we worry about catastrophic failures (preventing them, primarily, but recovering from them too) so you don’t have to. To this end, we make automatic failovers—and cluster monitoring for the shortest and most seamless transitions—a top priority. Heartbeat, our multi-node monitor, and the industry standard, keeps a close eye on the health of your systems, automatically performing failovers when needed. Heartbeat can quickly and accurately identify critical failures and seamlessly transition to an elected secondary node.

The automatic failover system in place at Liquid Web is one of many components that comprise our HA infrastructure and uptime guarantee. We offer 1000% compensation as outlined in our SLA’s 100% uptime guarantee.

What does this mean?

This means that if you experience downtime we will credit you at 10x the amount of time you were down. At Liquid Web, we also continue to operate at 99.999% (or five 9s), a gold standard for the industry—this equates to only 5.26 minutes of downtime a year, 25.9 seconds of downtime per month, and 6.05 seconds of downtime a week. Five 9s is incredibly efficient and we are proud to operate in that range. However, we are constantly striving for more efficiency, more uptime, and optimization.

A Final Reminder: Failures Do Happen 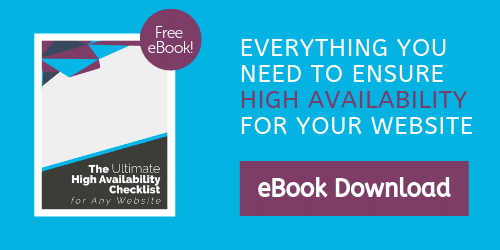